Preceding her valedictory speech, colleagues and friends will celebrate the work of Professor Marjolein ’t Hart by discussing her work and launching the book The early modern state: Drivers, beneficiaries and discontents (eds. Pepijn Brandon, Lex Heerma van Voss and Annemieke Romein), containing essays in her honour. The volume will be published by Routledge later in June.

In the course of the early modern period, the capacity of European states to raise finances, wage wars, subject their own and far away populations, and exert bureaucratic power over a variety of areas of social life increased dramatically. Nevertheless, these changes were far less absolute and definitive than the literature on the rise of the “modern state” once held. While war pushed the boundaries of the emerging fiscal military states of the seventeenth and eighteenth centuries, rulers remained highly dependent on negotiations with competing elite groups and the private networks of contractors and financial intermediaries. Attempts to increase control over subjects often resulted in popular resistance, that in their turn set limits to and influenced the direction of the development of state institutions. Written in honour of the leading historian of war and state formation in the early modern Low Countries, Marjolein ‘t Hart, the chapters gathered in this volume examine the main drivers, beneficiaries and discontents of state formation across and beyond Europe in the early modern period.

This event is freely accessible, registration is not required. 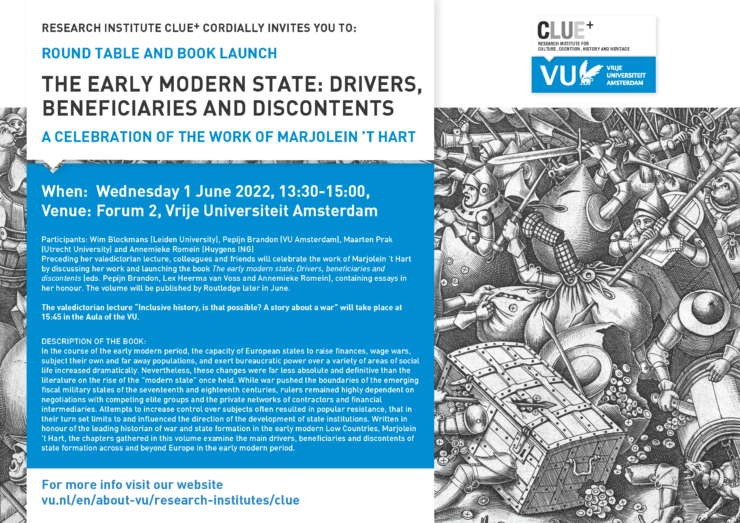